Easy semi-homemade copycat Burger King Cini Minis™ are little bites of delicious cinnamon flavor. Crescent roll dough is used to make these mini cinnamon rolls that are topped with a simple icing. They are the perfect size to pop in your mouth for a quick breakfast.

When I was in collage my morning class was close to a Burger King. I lived off of their onion rings and zesty sauce and their Cini Minis™ for breakfast.

These mini cinnamon rolls were introduced in 1998 but then unfortunately were taken off the menu. They were so popular there is actually a petition to bring them back.

Since there is no sign of them returning we decided to make an easy copycat version to enjoy at home.

Here is what you will find in this post:

Only a few ingredients are needed to make these flakey, mini rolls.

Brown sugar – You can use light or dark brown sugar.

Milk – Use whatever you have on hand like 2%, whole milk, half and half, or a dairy free alternative.

Vanilla extract – This adds an extra layer of sweetness and richness to the icing.

How to make copycat Cini Minis

Step one: Preheat the oven to 375 degrees F. Line a baking sheet with parchment paper or silicone mat.

Step two: Place cinnamon, and brown sugar in a bowl and mix to combine.

Step three: Open crescent roll dough and roll it out on a clean surface. Separate into 4 rectangles using a knife or pizza cutter. Make sure to press the perforations together to seal into one rectangle.

Step five: Roll the rectangles into logs, rolling from the long sides. Cut each log into slices, about 1/2-inch thick. Place slices of rolls on the prepared baking sheet. Bake for approximately 8 minutes or until starting to turn golden.

Step six: Make the icing. Stir together powdered sugar, milk, and vanilla in a small bowl. Drizzle over the tops of the cinnamon rolls or use as a dip.

How to store leftovers

Store: Have leftovers? These crescent cinnamon rolls can be stored and reheated for the next day. Make sure to let the rolls completely cool. If possible store the cinnamon rolls and icing separately in air tight containers.

Reheat: There a a few different methods for reheat. Check out how to reheat cinnamon rolls for directions in the microwave, oven, and air fryer.

Can you prepare crescent roll cinnamon rolls ahead of time? Yes, they can be prepared the night before. Store them in the refrigerator, covered in an airtight container or plastic wrap.

Can you freeze mini cinnamon rolls? Yes, bake them and let them completely cool. Store in a freezer safe bag or container without the icing. 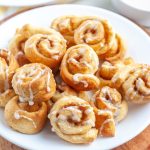 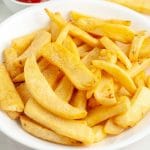 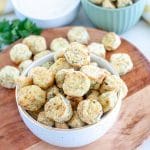 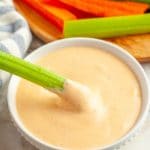 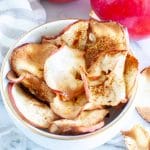 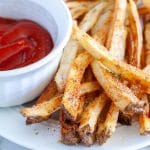