A classic beverage that is loved by many, the Roy Rogers drink is a delicious mix of cola and grenadine. Both kids and adults love this tasty, carbonated mocktail.

Roy Rogers and Shirly Temples are some of our favorite mocktail‘s to serve when we have friends and family over to our house. They are both super easy to make and everyone loves the combination of bubbly soda and grenadine.

Shirly Temple’s are made with lemon-lime soda while Roy Rogers are made with cola. Some people thing say they taste like a cherry Coke. Both drinks are mixed with grenadine syrup and of course you can’t forget the maraschino cherries.

How to make it a cocktail?

To make this into an adult cocktail, add 1-2 oz of your favorite liquor like bourbon, rum, whiskey, or vodka.

Float: Make this into a float by adding a scoop of vanilla ice cream or top it with a dollop of whipped cream.

Garnish: If you don’t want the cherries, try adding a slice or orange or lime.

What cola is best for Roy Rogers

You can use your favorite cola like Coke or Pepsi. I even like changing it up with Vanilla Coke every now and again. Whatever cola you decide to use, make sure it’s fresh. Part of the fun of this drink is the carbonation and fizz so you don’t want to use flat soda.

Many people thing grenadine is cherry juice beacause of it’s color but it’s actually made from pomegranate juice and sugar. This non-alcoholic fruit syrup is used for many different drinks like a Malibu Sunset, Blushing Mimosas and Shirley Temples.

Why is it named Roy Rogers?

This drink was named after Roy Rogers who was known as the “King of Cowboys”. In 1935 he was a member of a western singing group and then later went on to star in movies. He often starred alongside his horse, Trigger, and his wife Dale Evens. He made about 100 movies during his career. Along with this drink, Roy also had a restaurant chain named after him.

If you like watching how to make videos, be sure to check out the video below and check out my YouTube channel.

Be sure to let me know how you liked this recipe in the comments below. 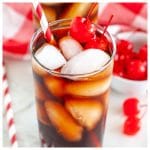 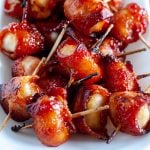 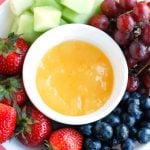 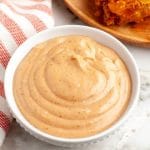